Club night last night and my first opportunity to try out my Union troops and (some of) my Confederates. I was a few minutes late and so was not able to deploy all my snake fencing as a lot had already been laid out but also I got to use The Little House On The Prairie plus my new apple orchard.

Rules were Rebels and Patriots and the scenario was devised by Neil (who also provided the bulk of the Confederates). The Union were in possession of the hill and the rebels controlled the crossroads. Victory was to the player who controlled both by games end.

My plan was simple, use my veteran 54th Massachusetts to assault the crossroads on my left and use my smaller green volunteer infantry and cannon to hold the hill on my right. 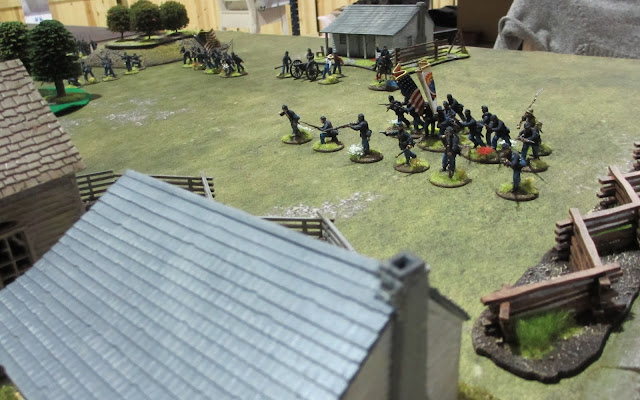 First thing I learnt was the Commanding Officer does not need to be attached to a unit. Doh! The errant rebel figure in the 54th colour party unit is to make up numbers while Gould-Shaw is free to influence wherever he is most needed.

The 54th push forward to the crossroads. 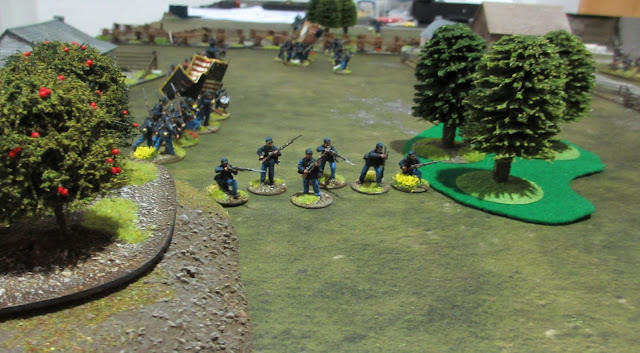 While on the right the skirmishers cover the ground between the woods and the precious hill (complete with my orchard atop!).

A mix of my rebels and Neil's spent a lot of the game just trying to mass for an assault on the hill.

Quite early on the artillery ran out of targets due to line of sight being blocked. Without a limber trying to manhandle the artillery 2" at a time proved laborious. 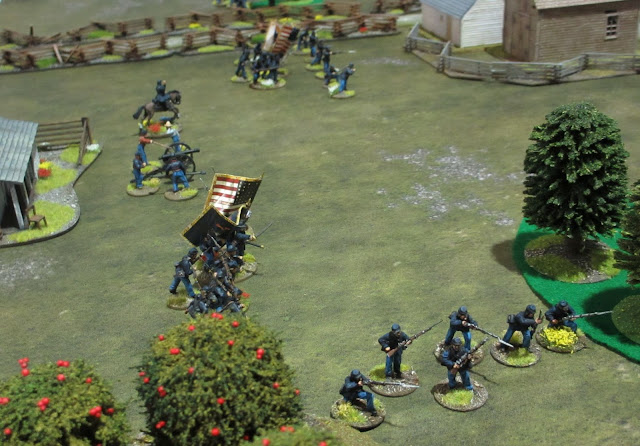 The assault by the 54th plunges on while the volunteer infantry colour party repeatedly failed activation rolls (even with Gould-Shaw being close enough to add to their rolls).

Eventually they occupied the wood, the artillery dragged onward and supported the skirmishers. The other volunteer unit fired some rather effective volleys on the gathering rebel forces.

However the rebel left never really managed to get it together. By the last turn the mounted skirmishers had just managed to cross over the snake fencing. 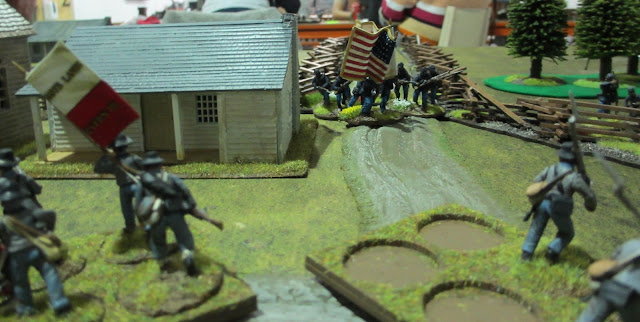 The 54th were unstoppable and the crossroads was open for the taking with rebel units retreating everywhere.
So that was it, the last move had the Union poised to take the crossroads and the rebel attack on the right flank effectively covered off before it ever started. Together with the sheer number of rebel casualties confirmed this as a great victory for the Union. Hurrah!!!
This was a lot of fun and already has me thinking about different periods for R&P plus other Osprey rulesets. The figures numbers are achievable, the games take a few entertaining hours and everybody has fun without being bogged down in rule interpretation. Watch this space!